On the 14th of January, the celebration of Kagami Biraki was held in the Tanrenkan dojo, in Iwama. The event gathered about 75 people, practitioners from Japan and foreign dojos as well as official guests. 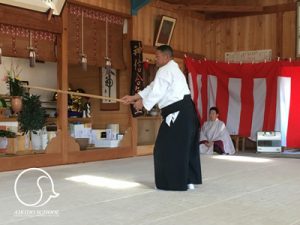 This traditional Japanese celebration symbolizes the start of the new year. It represents the opening of the dojo and is the opportunity to gather practitioners for what symbolizes the first training.

Many dojos from all over Japan came to witness, and participate to this event : Sendai, Tanabe, Nagoya, Osaka, Akita, Hitachi, Tokyo (Uehara) as well as Busenkai and Ryusenkai were present. France, Germany, Ukraine, Italy and Iran were represented as well.

The first part was a ceremony led by a Shinto priest, Takahashi san, for the purification of the dojo and the kamidana in the start of this new year. After prayers from both the priest and Hitohira Saito Sensei, sakaki branches were distributed to the dojo cho and some guests that then placed them in the kamidana to symbolize the purification of their dojos as well, and the link unifying those to the Tanrenkan.

At that point of the day, two official representants gave a speech for the opening of the celebration. The first was M. Yamaguchi, mayor of Kasama, the city which Iwama is part of. Then came M. Tokohoki, an Ibaraki lawmaker. Both of them mentioned the importance of Budo as a way to preserve certain qualities, that can’t be developed through sports, or athletic disciplines, such as Olympic games.

After this formal moment, we moved on to a short keiko. As the dojo was overcrowded, we had to practice in groups and be very aware of our surroundings. Sensei started with shumatsu dosa, for warming up after the long ceremony. The keiko moved on to Tae no henko (kihon then ki no nagare) then Morotedori Kokyuho, as the founder described those two techniques as the necessary beginning of every training. Sensei taught then a form of morotedori kokyunage, where the spiral movement is emphasized and tori makes a complete pivot to throw uke on his back. This short class ended with katate dori shihonage omote using a footwork close to the first movement we used for warming up.

Hitohira Saito Sensei once again used this opportunity to give us a glance at the depth of the study we can put into basic techniques.

After bowing toward the kamidana filled with presents, it was time for the demonstration, or enbukai. For this event, it is customary that every dojo represented sends one – or several – students to demonstrate techniques. In this particular occasion, the enbukai is dedicated to the kamisama, and not for a purpose of showing off high skills or attract people. In this spirit, there is no need to look for speed or spectacular techniques. The goal is to demonstrate proper techniques, harmoniously and show the level of study where we stand.

This demonstration was opened by a special guest, Sobue sensei, from Mito city, a former student of Morihiro Saito Sensei and now local martial art expert of the Sekiguchiryu iaido style. He came with a student of his and demonstrated various katas with tachi and kodachi (small sword, held with one hand). The study they do is by form, unrelated to our practice but we share many focuses with this very traditional style. After the iaido demonstration, they moved to empty handed techniques, very traditional jujutsu, using throws, finger locks or strikes to the eyes or groin. The level of mastery shown was impressive and many points shared with our study were demonstrated, such as Zanshin, Awase and of course impeccable etiquette. 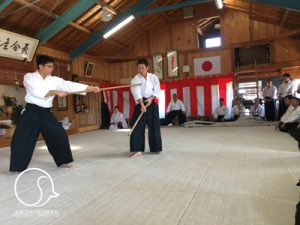 After this opening, one by one, all the dojo presents were called. They practiced techniques under the attention of Hitohira Saito Sensei and the whole audience. We had the opportunity to see a display of various techniques, at various level, giving us an idea of the wide range of practices. Then it was time for the Tanrenkan students to demonstrate, starting by all the uchi deshi. As many as 12 students demonstrated until it was time for Mitsuyoshi and Yasuhiro Saito to go.

Mitsuyoshi sensei went first, demonstrating the 13 no jo no awase with his brother, then they exchanged roles and Yasuhiro sensei demonstrated the 31 no jo no awase. The level of speed, accuracy and spirit put into these movements were, by far above the rest. This showed to all the goal we should aim for in our daily practice. As we said, this day is not an event to put on a show, this is a time to present the way we train. This demonstration, as impressive as it was, was not only about the perfection of the movements they did, but about the spirit in which we should all practice those. Everyone that had the opportunity to train in the Tanrenkan knows, that there, the spirit of the practice is cultivated and pushed forward, more than anywhere else. 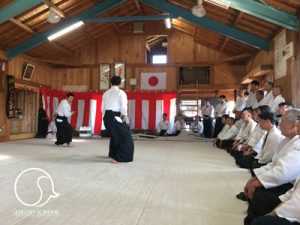 Then it was time for Sensei to conclude this enbukai. He bowed to the kamisama, holding a jo and started demonstrating 13 and 31 no Jo. It was interesting to see our Soke demonstrate the same movements than his sons, in a slower and steadier manner. This was a way to see where the upcoming generation of masters stand compared to the lifelong study of their father and teacher. Once more, we had the opportunity to see the spirit put into those movements, perfectly executed. Hitohira Saito Sensei then called Otaka sensei for uke and demonstrated flowing techniques, mostly kokyunage. This was a display of movements coming naturally, with awase, in perfect accordance to the kihon forms we all struggle with. We had the chance to see where this basic study can lead us as the gap between kihon and ki no nagare seems so small, watching our Soke demonstrate. After this fantastic conclusion he apologized for the bad medical state of his knees, even if, from where we stood, no one could see the influence it had on his performance…

There was then a time for delivering Dan certifications. Several Japanese students received their grading from the hands of Sensei as well as Mohammed Arabsorkhi, teacher from Iran who received 3rd Dan.

It was then time to all bow down to close this part of the day, and set up the dojo for the party.

Sensei opened the New Year sake and the meal started with a speech. He mentioned the continuity of the Aikido of the founder through his work he and soon his sons.

We then all raised our cup and the actual celebration started. 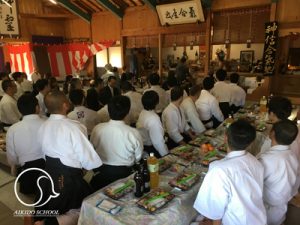