On may the sixth, a large memorial service was held in the Saito family house, in honor of the anniversary of the passing of Morihiro Sensei. This gathering usualy takes place every year among members of the family.

This ceremony, or “shinobukai”「偲ぶ会」 (meeting for remembering), was quite important this year, as it is the 17th funeral service in honnor of Morihiro Saito Sensei.

Indeed, in the japanese tradition, the second year after someone’s death is counted as the third. This year, 16 years after the passing of Morihiro Sensei is considered as the 17th anniversary or “jyunana kaiki”「十七回忌」.

The meaning of this event this year was deeper as it represents Morihiro Sensei’s spirit reaching a higher spiritual state. For this reason, the audience of the ceremony was widenned. 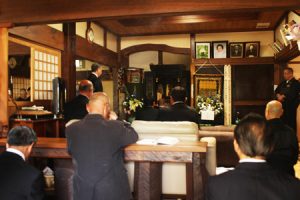 People came to withness this special day from many places in Japan, but also from the United States, and Portugal. The audience included family members, students of Morihiro Sensei, old friends, town officials, several dojo chos of Iwama Shin Shin Aikishurenkai, and of course, some soto deshis and the uchi deshis.

We were more then seventy to gather in Hitohira Saito Kaicho’s house, to witness the bouddhist ceremony lead by the family priest, in front of the “butsudan” 「仏壇」(buddhist altar found in most japanese households). It was decorated for the occasion and many offering were placed in front. 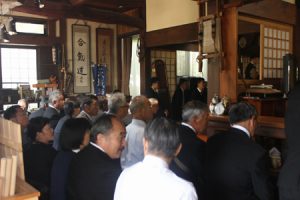 The house was filled and we had to install more benches outside to sit everyone. We all sat down in silence for a moment, and the ceremony started. After preying and chanting, the priest invited everyone to pay their respect and burn incence for the spirit of Morihiro Saito. At this point of the ceremony we were able to witness the crossing of all generations meeting for this event. The elders went first, old friends or students, then came Morihiro Sensei’s children, then their children and finaly those who are his great grandchildren. It was a moving moment to witness once again the strength of the link between generations among the Saito family, sourrounded as well by generations of deshis.

When the ceremony was over, Hitohiro Saito Sensei invited the guest to the Shin Dojo for a less formal gathering. Tables were set in the dojo for the occasion and a meal was served, along with drinks. An interview of Saito Sensei was screened, and family photo albums were avaible for the guests to watch. 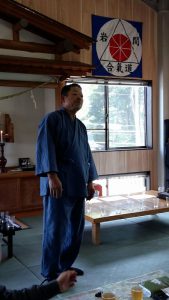 We all raised our glasses sake for a big “Kempai” 「献杯」(“cheers” in honor of the deceased) as Sensei opened the party with a speach. Theguests were placed along 3 tables, each for one generation of students. Hitohira Saito Kaicho sat down at the head of the table of the current deshis, next to a special guest, Honma Sensei, who traveled from Denver for the occasion. There was also a “kagezen”「陰膳」 (table for the absents or deceased), with a glass of sake for every member of a list that Sensei wrote down. 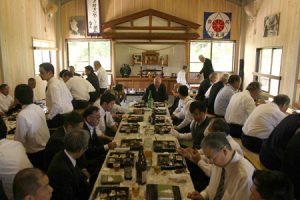 Many memories were shared during this party, among old remembering, or to younger deshis, eager to learn more about Morihiro Sensei. During his speach, Hitohira Saito Kaicho announced the fact that he will officialy give to his son the name “Morihiro” on the celebration of the anniversary of the founding of his organization, on june the ninth. 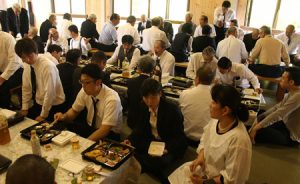 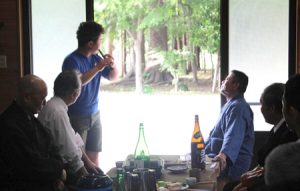