This ceremony started at ten o´clock and, between guests and practitioners, there were about 60 people. The mayor of the prefecture, Mr. Shicho Yamaguchi and the Ibaraki Legislator were also present.

In his speech, Sensei made reference to the ideas of the Founder especially present in the morning, evening and night prayers dedicated to the Kamisama. Sensei also made some comments about an original calligraphy of O’Sensei hanging on the dojo wall and the fact that O’Sensei would go to the waterfalls, Taki, on the 28th of every month, to pray.

After this, there was a brief body warming through some Aikido stretching techniques and then we all received the Shinto priest [Kannushi-san], who prayed before the altar and then turned and blessed all of us and presented us with sacred sakaki branches.

Following the ritual, Sensei and then Waka Sensei, placed the sacred branches [tamagushi] in “Kamidana”. Then it was the turn of the guests to do this and finally of a representative of each dojo. 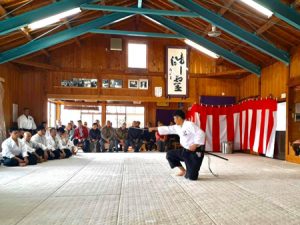 At the end Sensei gave a brilliant demonstration of Kumitachi (1, 4 and 5) with some henka (variations), having Waka Sensei as a partner. He also showed some tachi dori and taijutsu techniques with the different representatives of the various shibu dojo. It was an amazing demonstration, with an incredible fluidity, which allowed us to see first hand the true Aikido (the authentic essence of Aikido). 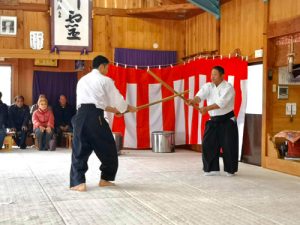 After the exhibition, there was the bestowing of certifications and then everyone helped to set the dojo for the party. 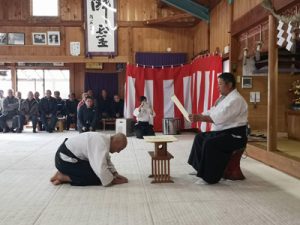 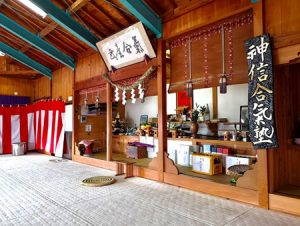 As offerings to the kamidana, we could see fruits, vegetables, fish (sengio), sea-weed (kambutsu), rice cakes (Omochi), salt (shiou), rice (kome), Oshinko, sake, sweet beans in mocha, and several offerings of sake from each of the shibu dojo.

Both the guests and the rest of us were delighted with an array of traditional dishes during the party, such as oshushi, sashimi, karage (fried chicken), oshinko, and generous amounts of sake and beer. 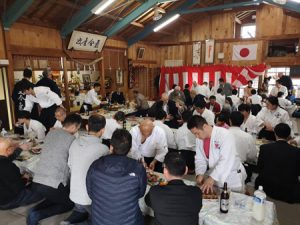 It was a most agreeable celebration!